First, a little disclaimer, this post might be a little biased because I love Vienna. This is my third time being there and I still love it as much as I did the first time.

I hadn’t planned on going to Vienna until quite recently actually, my boyfriend Adam was going for work so I decided to tag along. The place we stayed was the most homely and comfortable Airbnb I’ve ever been in, I couldn’t recommend it more:

But now to talk about the city! Vienna = cafes, museums and beautiful buildings. I’ve seen quite a lot of attractions here so I wanted to try some places I’d never been to.

The first day I was here I walked through Naschmarkt. It’s great to stroll through and browse, but I would say other than fruit and vegetables the main sale items are nuts (sweet and/or spiced), dried fruit of EVERY kind and olives and peppers that have been stuffed with anything and everything.

I found the downside to Naschmarkt was the vendors, who I feel can be a tad aggressive. They often offer samples and even if you say no I found them quite demanding which was a put-off. At the end of the day though I’d love to live close to something with so much life and variety.

After coming out the end of Naschmarkt by Karlsplatz I went to Cafe Museum on Karlsplatz for a bit of breakfast ( cake breakfast that is =^.^= ) 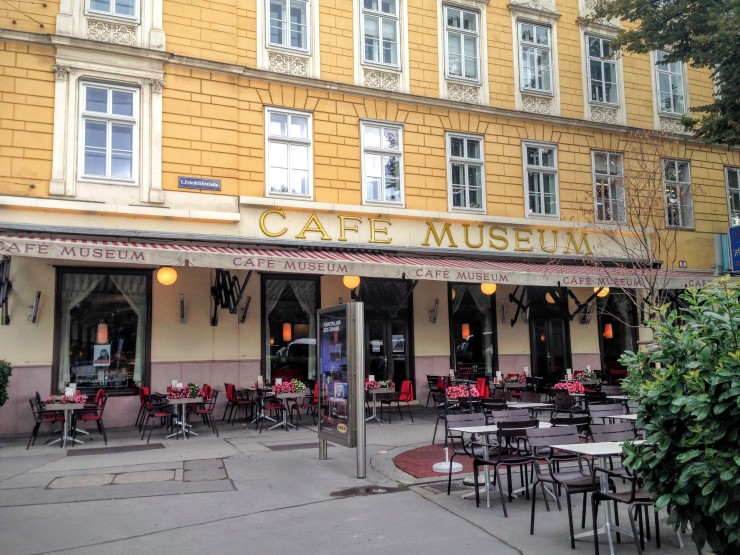 I love art and Vienna has a lot of art museums which can be found in the Museumsquartier. So after Cafe Museum I went to the art history museum. It costs 15 euros if I remember right, but if you end up buying a Vienna card you can get a discount in this museum- it’s not major (1 euro) but every bit counts.

I’d never been to the art history museum before and I have to say it’s probably the one I least enjoyed. It was still great but compared to the other art museum’s I’ve visited it was definitely the most disappointing as I love history, so I expecting to enjoy this more. There are great exhibits on French, Spanish, Flemish and German Renesance painters which I think would be benefitted by an audio guide. I didn’t buy one and sadly I think it might have taken from the experience. The one artist that sticks out that I would tell anyone to look up is Giuseppe Arcimboldo- so creative!

I think I was slightly more enthralled by the interior of the museum than some of its exhibits, which feels almost sacrilegious to say, but the interior is beautiful.

Below is the cafe at the museum. 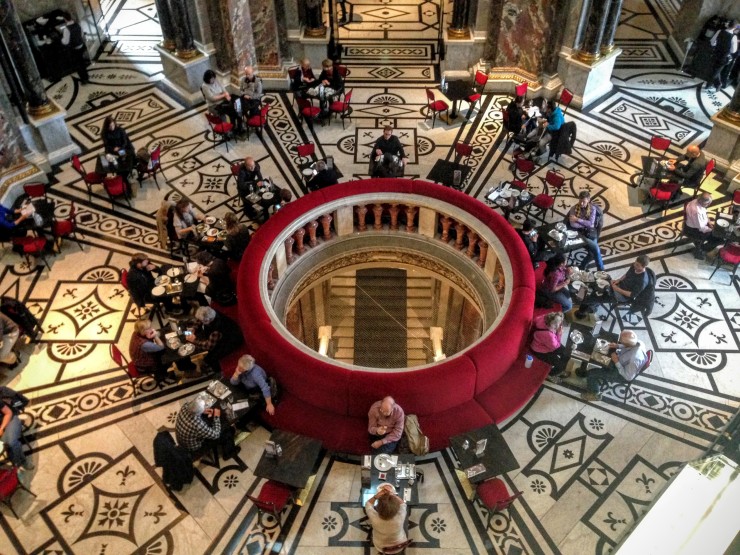 After I was finished in the museum I wanted to stroll around the city and find some of my old haunts. I walked across from the Museumquartier through the ‘Äußeres Burgtor’ which is the outer gate to the imperial castle. 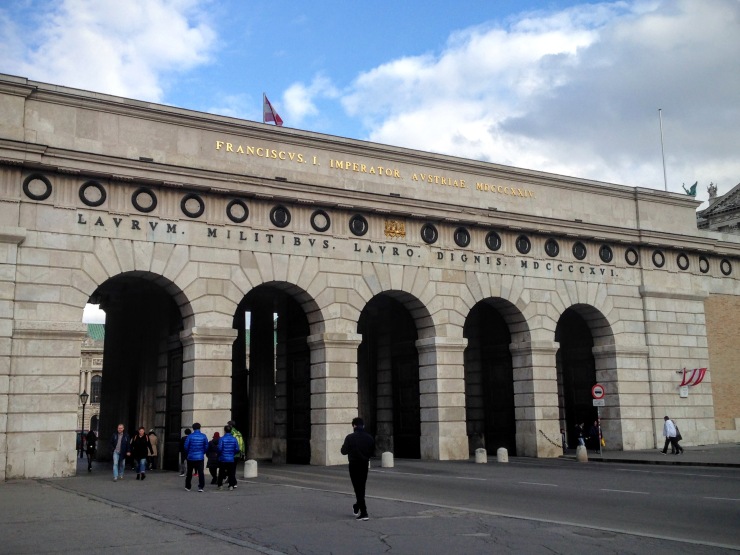 I went to the Volksgarten to chill and feed pigeons (love myself some pigeons), I think it’s the most beautiful place in Vienna that I know of. Afterwards, I walked through the Hofburg, down Kohlmarkt and onto Graben- the most central street in Vienna.

As I looked at this H&M on Graben there was an American guy standing behind me, he said: “y’know I would say that Paris is my favourite city, but looking around here I’m starting to rethink that”. I felt that everything he said just summed up how great Vienna is. Like seriously look at this building! It’s an H&M store!

This is Stephansdom (St. Stephen’s Cathedral) which I think is well worth the visit! Other than being really beautiful you can get a tour of the crypts below and it’s actually pretty creepy.

I had a bit of extra time before I had to meet Adam to I made a pit-stop in the Albertina. I hadn’t planned on going but a poster for an exhibition of Pointillism caught my eye.  I think this museum is one of my favourites! It has pieces from Degas, Monet, Picasso and Van Gogh (bae). 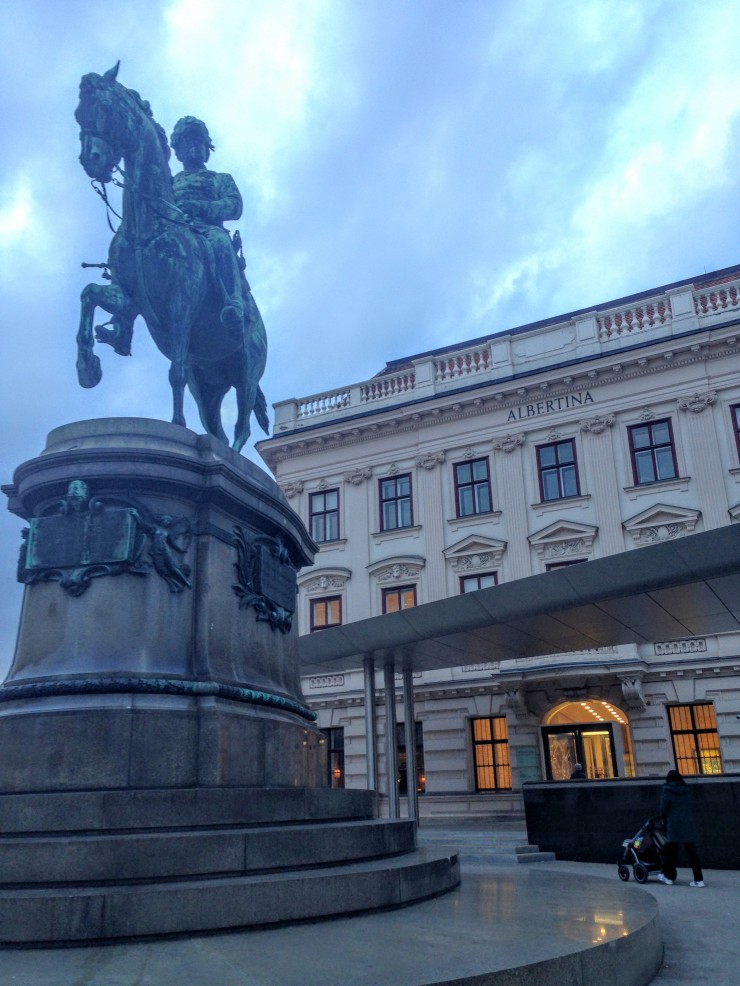 I met Adam and we went out that night and had a great time in a bar in Naschmarkt called Rafael’s Vinothek, I’d say it’s the best in the city but I haven’t been to any others! The owner is a sound fella, really nice and the wine was really good. We ended up in an Australian bar called Crossfield’s (no idea how) it was good for pints though and they had Tegernsee Brauhaus which is a beer Adam and I are fond of.

The next day I left the apartment relatively in one piece and headed for a little cafe about 2 doors down from where we were staying.

Like seriously the beauty of Viennese apartment buildings will never cease to amaze me. 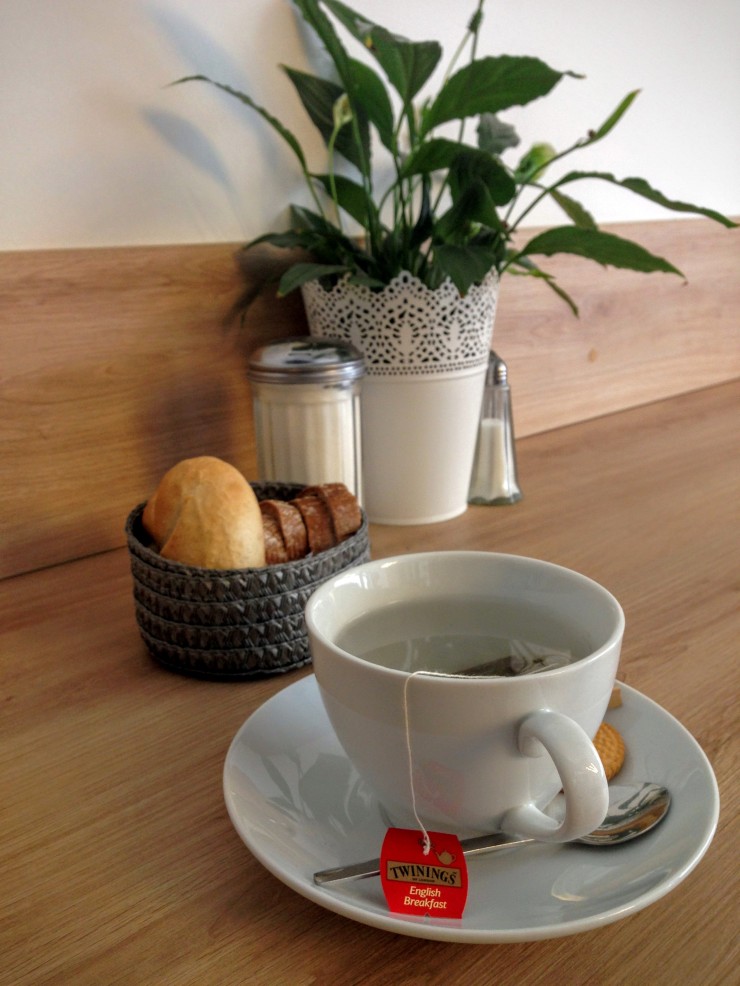 I had a Viennese breakfast at Budapest Bistro. The staff are nice and it has a really nice, quiet atmosphere. The atmosphere to me feels so relaxed that you could go with a friend and feel like people aren’t eavesdropping on your conversation or alternatively just sit, chill and read.

I went to the Leopold Museum afterwards, they have a big Klimt collection (also bae). I would really recommend this one if you like Schiele (who I’d never heard of before) but wow what an interesting guy and life! I can’t pretend to know loads about art but for me if I know an artist’s life story and what they were going through when they created a piece it really adds to my experience of it. I have to say the exhibition in the Leopold was very well laid out and really made my time there enjoyable.

I met Adam and his work colleagues afterwards, we went to Beethoven’s house because Adam really likes Beethoven (very basic- I wouldn’t recommend even for the 5 euros you pay for entry) and we went to the Rathaus afterwards. There was a circus in town and it made the place look like something from 100 years ago.

Afterwards we went to Cafe Central ❤

If there is one place you have to visit while in Vienna – THIS IS IT! Great atmosphere, great food, great cake, great service. The place has so much history and if you are there anytime between 5 and 10pm in the evening there is a piano player who will serenade you.

After Cafe Central I wanted to check out Zentralfriedhof which is the main cemetery in Vienna. Plus a lot of famous musician’s are buried there so that satisfied Adam (he isn’t much of a history person) It’s about 15 minutes outside of the city but it is not hard to get to. Go to Landstraße/Wien Mitte, take the S7 and hop off at Zentralfriedhof. The train stop is by gate 11.

A word of warning, this cemetery is absolutely huge! I really can’t emphasise how big it is, it’s roughly a 2km walk from gate 11 to gate 2 which is the main entrance. It’s a very beautiful and well kept .

We went to find Beethoven and Mozart’s grave, it’s very straight forward but if you google it you’ll find some helpful websites. The musicians are actually all buried in the same area in group 32 A, near gate 2- the main entrance (although we couldn’t find Mozart). The cemetery closed at 6 that day, they close all the gates except for the emergency exit at gate 2 so if you end up leaving late like us, just head straight for gate 2. We opted for an S-Bahn to take us back to the city instead of walking back to the S7 train stop as it’s located on the opposite side of the cemetery from the emergency exit.

My final day there Adam and I hung out and had a late breakfast in Cafe Konditorei Maestro which was a couple of doors down from Budapest Bistro. I have to say is better value than Budapest Bistro but things aren’t as ‘pretty’ y’know? The woman there is absolutely sound though! She will find the best way for you to have what you what at the cheapest price.

In the words of Frederic Chopin ‘Vienna is a handsome, lively city, and exceedingly pleases me’ I’ll be back! 🙂